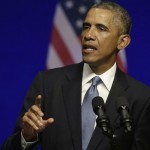 President Obama stressed that U.S. efforts against ISIS will not escalate to a full-blown war on Meet the Press today. This is “not the equivalent of the Iraq war,” he said, adding that the U.S. cannot “serially occupy various countries all around the Middle East.”

While he admitted airstrikes alone would not defeat ISIS, Obama said “the boots on the ground have to be Iraqi.” The president also said he will speak to Congress on Tuesday and give a speech to the American public outlining the U.S. ISIS strategy on Wednesday. When host Chuck Todd asked Obama if he needed Congressional authorization to proceed with his plan to combat ISIS, Obama responded “I’m confident I’ve got the authorization I need to protect the American people. This speech will allow Congress very specifically to know what we’re doing and what we’re not doing.”

Obama also defended his decision to delay executive action on immigration until after the November election, saying the surge of unaccompanied minors forced a political change. “The truth of the matter is that the politics did shift midsummer because of that problem,” he said. Read more at NBC.