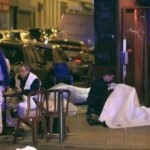 At a press conference in Paris on Tuesday, where he had been attending the international climate summit, President Barack Obama said that “mass shootings” like the one that took place at a Planned Parenthood clinic in Colorado last week just do not happen in countries other than the United States.

“With respect to Planned Parenthood, obviously, my heart goes out to the families of those impacted. I mean … I say this every time we’ve got one of these mass shootings. This just doesn’t happen in other countries,” Obama said in a news conference at the Organization for Economic Cooperation and Development.

On Friday, a gunman, Robert Lewis Dear, opened fire at a Planned Parenthood clinic in Colorado Springs, Colo., killing three people and injuring nine in an hourslong standoff. A police officer was one of the victims who were slain, along with two civilians.

The president’s remarks come just over two weeks after members of the Islamic State of Iraq and Syria (ISIS) launched multiple terrorist attacks in Paris, which is hosting the COP21 climate change summit, killing 130 people. In January, members of ISIS (also known as ISIL or the Islamic State of Iraq and Levant) attacked and killed 12 people in a mass shooting at the Charlie Hebdo satirical magazine in Paris.

“We are rightly determined to prevent terrorist attacks wherever they occur – whether in the United States or with friends and allies like France – and we devote enormous resources and properly so to rooting out networks and debilitating organizations like ISIL and maintaining the intelligence and improving the information sharing that can identify those who would try to kill innocent people,” Obama said at the climate change summit.

“Yet in the United States, we have the power to do more to prevent what is just a regular process of gun homicides that is unequaled by multiples of five, six, 10, and I think the American people understand that,” he said.