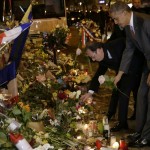 President Barack Obama visited the Bataclan concert hall on Sunday to pay his respect to those killed in the terrorist attacks in Paris earlier this month.

The president’s motorcade went directly from Orly Airport to the concert hall, where he was joined by French President Francois Hollande and Anne Hidalgo, the mayor of Paris.

All three leaders placed a single flower at the temporary memorial to honor the some 130 victims who died. Obama arrived in Paris for the international summit on climate change. Read more.