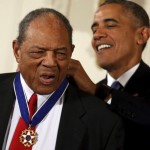 President Barack Obama honored 17 Americans from fields including sciences, arts, politics and human rights with the Presidential Medal of Freedom on Tuesday.

Obama praised the group as “extraordinary” during the ceremony. “Even by the standards of Medal of Freedom recipients, this is a class act,” he said.

The Medal of Freedom is the highest civilian honor bestowed by the president. Read more at the Washington Post.