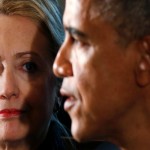 Just a day before Hillary Clinton is expected to announce her presidential bid, President Barack Obama said on Saturday that, “I think she would be an excellent president.”

Clinton lost the Democratic nomination to Obama in 2008.

“She was a formidable candidate in 2008, she was a great supporter of mine in the general election, she was an outstanding secretary of state, she is my friend,” Obama said.

The president made the comments while at a summit in Panama.

“The one thing I can say is, she’s going to be able to handle herself very well in any conversation or debates around foreign policy,” Obama said. “And her track record with respect to domestic policies is I think one that cares about working families.” Read more at NBC News.