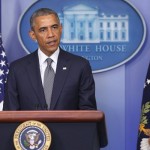 Obama’s two days in Washington were mostly quiet, and concluded with the president receiving his daily national security briefing in the morning, and joining Vice President Biden to huddle with members of his economic team in the afternoon.

Administration officials have insisted for weeks that the president just wanted to return to the White House for a series of meetings, but the explanation was met with a healthy dose of skepticism, since Obama rarely interrupts his vacations.

Speculation for why Obama returned focused around the possibility of a secret foreign leader meeting or the roll out of a new administration initiative on immigration or corporate taxes.

But no such explanation materialized.