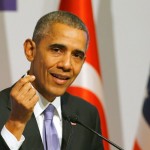 President Obama said Monday that deploying ground troops against ISIS would be a mistake.

“Assume that we were to send 50,000 troops into Syria,” he said. “What happens when there’s a terrorist attack generated from Yemen… or Libya?”

Speaking from Turkey at the opening of the G20 summit, Obama called ISIS the “face of evil.”

He also announced plans to “streamline” the sharing of intelligence with France, including information relating to threats from ISIS. He also said the U.S. would make additional efforts to stem the flow of foreign fighters to join the terrorist group. Read more.