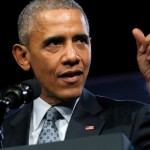 Speaking to a crowd at a Democratic fundraising event in New York, the president mocked the GOP candidates for the recent media firestorm surrounding the Republican effort to negotiate new debate rules after the Republican National Committee canceled the next debate, which was to be moderated by NBC News and Telemundo.

“Every one of these candidates says, ‘Obama’s weak, Putin’s kicking sand in his face. When I talk to Putin, he’s going to straighten out,’” he said. “Then it turns out they can’t handle a bunch of CNBC moderators at the debate. Let me tell you, if you can’t handle those guys, then I don’t think the Chinese and the Russians are going to be too worried about you.” Read more at NBC News.