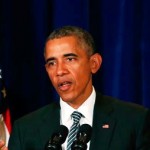 ISIL’s still not the varsity team, President Barack Obama said Sunday, but if Republicans running for president and in Congress continue to respond to attacks by playing off fears, they’re doing the terrorists’ work for them.

A Republican reaction that’s tried to block refugees from entering the country — and members of the media whom he blamed for lacking perspective in coverage over the past week — give in to fear as the terrorists want, help them recruit and let a group of people who’d have no hope of actually defeating American forces on the battlefield win anyway.

Upending American policy and talking about Christian-Muslim tests for entry that he said accept ISIL’s terms of a religious war will increase the threat of more attacks.

Even as Obama the group, also known as the Islamic State, for the Paris attacks, and, for the first time publicly, for taking down a Russian passenger jet in Egypt, Obama repeatedly spoke about the limitations of the terrorist network that two years ago he referred to as the “JV team” — a remark that his critics still cite as evidence that he underestimates the threat.

“They’re a bunch of killers with good social media,” Obama told reporters Sunday. They are “dangerous,” he said, but, he added: “Our way of life is stronger. We have more to offer.”

Obama stayed muted but firm during a news conference in Malaysia that wrapped up a frustrating nine-day trip abroad for the White House as it watched the political debate slip away back home. Obama used the session to outline the broad strokes of the counterterrorism strategy he’s overseen — a coalition of 65 countries responsible for 8,000 airstrikes, humanitarian aid and other actions.

Obama echoed language he’s used to condemn mass shootings in America in recent months, saying he’s not going to accept the prospect of terrorist attacks on soft targets as “the new normal.”

Letting that happen, Obama said, or letting politicians get away with reactions like proposing a religious test for entry — as he several times condemned Republican presidential candidates for doing — is the essence of giving in.

“They can’t beat us on the battlefield, so they try to terrorize us into being afraid, into changing our patterns of behavior, into abandoning our allies and partners into retreating from the world,” Obama said. “As president I will not let that happen.”

The man behind the attacks, Obama said at another point, is “not a mastermind. He found a few other vicious people, got their hands on some fairly conventional weapons, and, sadly, it turns out if you’re willing to die, you can kill a lot of people.”

Obama said he understands why Americans are feeling afraid, but “I want to be very clear about this: I am not afraid that ISIL will beat us because of their operations.”

Immediately after finishing the news conference, Obama headed to the airport in Kuala Lumpur to fly home and find out whether he can hold the line against Republican efforts to halt the entry of Syrian refugees. The House bill that passed last week with changes to the refugee screening and admission process looks likely to stall in the Senate, particularly with the time that will pass until Congress returns after the Thanksgiving break.

But with Brussels on highest alert as Obama was speaking and fears peaking across America, he faces an uncertain way forward. Because of that opposition in the Senate, the government shutdown over the refugee policy that some congressional Republicans have threatened for now seems unlikely, though Obama has already conceded that he would be willing to consider certain changes to the refugee system.

Obama also faces challenges with allies after he returns to Washington. In recent conversations, Obama has refused to give ground on his insistence that Bashar Assad needs to give up power as part of the stabilization of Syria. That is expected to be one of the main points that French President François Hollande will press him to concede when he meets with the president at the White House on Tuesday.

After the Paris attacks, the French feel that there’s no more time to put into waiting out Assad’s collapse, and Hollande will be pressing for more immediate intervention to combat ISIL. That would include a level of partnership with Russia and President Vladimir Putin that’s left Obama unenthused — and which he said again Sunday that he viewed skeptically.

“The question at this point is whether they can make the strategic investment,” Obama said, noting that recent Russian strikes haven’t targeted ISIL so much as groups that are fighting both Assad’s forces and ISIL, and that he believes Putin underestimated the threat of ISIL to Russians. “We don’t know that yet.”

“Even if I were to cynically say my priority is ISIL and not removing Assad,” Obama explained, “the United States could not stop the fighting in Syria by those who are opposed to Assad’s rule. This is a practical issue, not just a matter of conscience.”

Those all come down to details in how he reaches that goal, Obama repeated several times at the news conference with confidence but still not with an emotional display or fervor that critics have been calling for since the Paris attacks.

Overall, Obama said, he’s sure how the campaign against ISIL ends.

“Destroying ISIL is not only a realistic goal,” Obama said. “It’s gonna get done.”