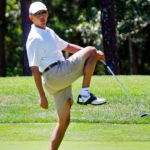 President Barack Obama was briefed on the ambush killing of two NYPD cops while on the golf course in Hawaii this afternoon, according to the White House press pool report.

Obama endured harsh criticism for golfing minutes after issuing a statement on the beheading of James Foley at the hands of Muslim militants in September.

“You know, it is always a challenge when you’re supposed to be on vacation because you’re followed everywhere. There’s always going to be some tough news somewhere,” Obama said. “I should have anticipated the optics.”

NYPD officers Rafael Ramos and Wenjian Liu were “assassinated” in their squad car YESTERDAY, Commissioner Bill Bratton told reporters. The suspect, Ismaaiyl Brinsley, 28, had posted violent anti-police messages on social media, including an Instagram picture showing blood on his pant leg which was reportedly taken after the attack. Earlier that day, he posted threatening images with the caption: “I’m Putting Wings On Pigs Today. They Take 1 Of Ours…Let’s Take 2 of Theirs,” adding the hashtags, #ShootThePolice #RIPEricGarner, and #RIPMike Brown.

In a statement issued from his vacation spot, Obama said there was “no justification” for the killings.