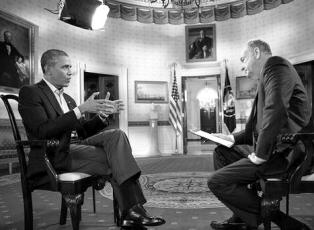 President Obama on Sunday defended his administration’s handling of the 2012 attack on the U.S. outpost in Benghazi, Libya, that left Ambassador Chris Stevens dead.

Obama, under questioning from Fox News’s Bill O’Reilly, reiterated his claim that the administration did not try to conceal that the fact it was a terrorist attack in order to help Obama’s reelection campaign.

“I’ve gone thorough this and we’ve had multiple hearings on this,” Obama said.

The president was asked what exactly Defense Secretary Leon Panetta told him when informing him of the attack.

“He told me it was an attack on our compound,’ Obama said. “The fact of the matter is that people understood at the time that something very dangerous was happening.”

Obama said that the notion the administration would “hide the ball” was false and he blamed Fox News for convincing people otherwise.

“What I am saying is ‘that is inaccurate.’ We revealed to the American people exactly what we understood at the time.”

“They believe because folks like you are telling them,” he said.

Obama said that he is focused on implementing increased diplomatic security measures around the world.