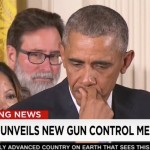 In his speech, he implored gun-rights activists to consider the right to free exercise of religion denied of “the Christians in Charleston, South Carolina, and the Jews in Kansas City, and that was denied to Muslims in Chapel Hills, and the Sikhs in Oak Creek.” And the right to free association “robbed from moviegoers in Aurora and Lafayette.”

And, as presidential tears began to emerge, Obama invoked children and the “inalienable rights to liberty and pursuit of happiness [that] were stripped from college kids in Blacksburg, and Santa Barbara, and from high schoolers in Columbine, and from first graders in Newtown.”

After a brief pause, and with tears streaming down his cheek, Obama repeated, “First graders.”