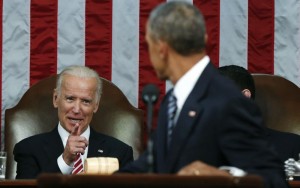 President Barack Obama announced a national effort to find a cure for cancer during his final State of the Union speech Tuesday night.

“Last year, Vice President Biden said that with a new moonshot, America can cure cancer,” he said. “Because he’s gone to the mat for all of us, on so many issues over the past 40 years, I’m putting Joe in charge of Mission Control.”

Biden has pushed for an end to cancer after losing his oldest son, Beau, last year to brain cancer.

Just hours before, a group of biotech companies, drugmakers, doctors and researchers announced a coalition called the Cancer MoonShot2020, which references Biden’s speech last October when he pledged a “moon shot” to end cancer. Read more at The Hill.