President Obama greeted the king of Saudi Arabia with a full bow from the waist Wednesday, a move one commentator described as a violation of protocol and not worthy of the office he holds. “I am quite certain that this is not the protocol, and is most unbecoming a president of the United States,” writes Clarice Feldman in an American Thinker commentary. The situation developed as leaders of the world attending the G20 summit in London assembled for a photograph to mark the event. In this first image, after the king extended his hand while Obama approached, Obama bends from the waist until his head is nearly at the monarch’s waist.

The action appeared especially awkward since among the dozens of world leaders and their spouses, handshakes abounded, but there appeared to be no other bowing in the room.

The U.S. State Department’s office of protocol, in a statement attributed to acting chief of protocol Gladys Blouda, confirmed the type of greeting between heads of state depends on the customs of the countries, but a handshake is the most common form of greeting. 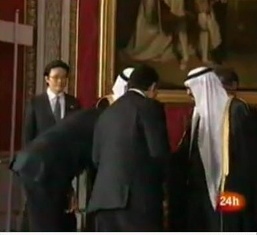 “You should expect to undertake a considerable amount of small talk, and learning a few Arabic greetings would be well received. Saudis will stand closer to each other than many westerners are used to, and members of the same gender will often touch arms when postulating or emphasizing a point. You should not draw away from this as it would be considered rude and rejecting. Be aware that due to the conservative nature of Saudi Arabian society, it is not considered proper etiquette for men and women to greet each other in public,” the site advises.

“It is proper etiquette to refer to a royal as Your Highness, and any members of the government ministries as Your Excellency,” it said.

Many of the proper procedures for meeting royalty are set by the British monarchy, since its members carry probably the highest royal profile around the world today.

The website for the British queen advises men who are from the United Kingdom to provide a neck bow (from the head only) “whilst women do a small curtsy. Other people prefer simply to shake hands in the usual way.”

“On presentation to The Queen, the correct formal address is ‘Your Majesty’ and subsequently ‘Ma’am’,” the site advises.

Jamie Glazov, the author of “United in Hate,” said Obama’s act actually was to be expected.

“And people don’t know what’s going on here? Are we kidding?” he said. “This is simply the continuation of fellow traveling. It’s to be totally expected. Leftists have prostrated themselves before despots throughout history – during the whole Cold War and now vis-a-vis jihadists in the terror war. ‘United in Hate’ crystallizes with precision how and why this dark process occurs.”

He cited the Obamas’ less formal interaction with the queen earlier.

“Obviously, the queen does not wield totalitarian power and does not mete out sadistic punishment – with which a believer yearns to identify. The Saudi king, meanwhile, is a tyrannical entity to which Obama can subjugate his individuality – and through which he can vicariously experience a feeling of power and purpose. This is the process of negative identification that every leftist must practice and that ‘United in Hate’ documents is at the heart of every leftist’s main driving force,” he said.