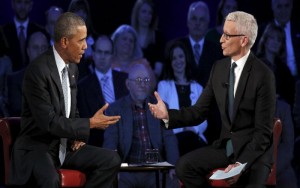 “I will not campaign for, vote for or support any candidate, even in my own party, who does not support common-sense gun reform,” he wrote.

Obama also admitted that while he’ll continue to advocate for gun control during his remaining time in office, gun reform is up to future candidates as it likely will not happen in this Congress or his presidency.

The president also added that the American people have a shared responsibility in passing gun control. The op-ed was published shortly before the president spoke at a town hall event on guns in American and two days after he announced a series of executive actions on gun reform. Read more at the New York Times.

Meanwhile, President Obama lashed out against the National Rifle Association (NRA) on Thursday for their absence at THE nationally televised town hall on gun violence hosted by CNN.

“There’s a reason why the NRA’s not here. They’re just down the street,” the president said. “And since this is the main reason they exist, you’d think they be prepared to have a debate with the president.”

Obama said the NRA has declined numerous invitations to strike up a dialogue.

The president, who announced a new series of executive actions on gun reform earlier this week, also said he appeared at the town hall because his advocacy for gun reform is “consistently mischaracterized” by pro-gun advocates like the NRA. “If you listen to the rhetoric, it is so over the top, so overheated,” he said referring to critics of his plan, who claim his policies aim to “take away everybody’s guns.” Read it more.