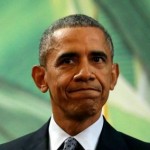 President Barack Obama on Wednesday morning slammed critics calling for the U.S. to halt its Syrian refugee program in the wake of the Paris terror attacks as “political posturing” that “needs to stop.”

Speaking to reporters in the Philippines, the president directed some of his criticism at New Jersey Gov. Chris Christie, who said he wouldn’t let even “3-year-old orphans” coming from Syria into his state.

“At first, they were too scared of the press being too tough on them in the debates. Now they are scared of three-year-old orphans. That doesn’t seem so tough to me.”

Obama added that the wave of anti-refugee rhetoric serves as a “potent recruitment tool” for ISIS. Read more at The Hill.