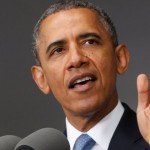 President Barack Obama announced Thursday: “Today I authorized two operations in Iraq – targeted airstrikes to protect our American personnel, and a humanitarian effort to help save thousands of Iraqi civilians who are trapped on a mountain without food and water and facing almost certain death.”

“I said in June – as the terrorist group ISIL began an advance across Iraq – that the United States would be prepared to take targeted military action in Iraq if and when we determined that the situation required it.

“In recent days, these terrorists have continued to move across Iraq, and have neared the city of Erbil, where American diplomats and civilians serve at our consulate and American military personnel advise Iraqi forces.

“To stop the advance on Erbil, I’ve directed our military to take targeted strikes against ISIL terrorist convoys should they move toward the city.”