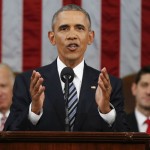 In his final State of the Union address Tuesday night, President Barack Obama rebutted critics who might doubt his commitment to punishing terrorists.

“ISIL will learn the same lessons as terrorists before them,” Obama said, using another name for the Islamic State.

“If you doubt America’s commitment — or mine — to see that justice is done, ask Osama bin Laden,” Obama continued. “Ask the leader of al Qaeda in Yemen, who was taken out last year, or the perpetrator of the Benghazi attacks, who sits in a prison cell. When you come after Americans, we go after you. It may take time, but we have long memories, and our reach has no limit.”

Obama has bragged about killing bin Laden before — and in similar terms. “Ask Osama bin Laden and the 22 out of 30 top al Qaeda leaders who have been taken off the field whether I engage in appeasement,” he said at a press conference in December 2011.