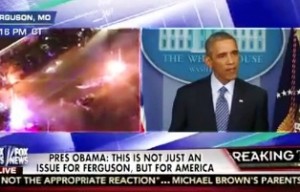 President Obama, speaking live to the nation after the decision in Ferguson not to indict a police office for the killing of Michael Brown, said that “America isn’t everything that it could be.”

“We shouldn’t try to paper it over,” said Obama. “Whenever we do that the anger may momentarily subside, but over time it builds up. And America isn’t everything that it could be. And I am confident that if we focus our attention on the problem and we look at what has happened in communities around the country effectively, then we can make progress not just in Ferguson but in a lot of other cities and communities around the country.”