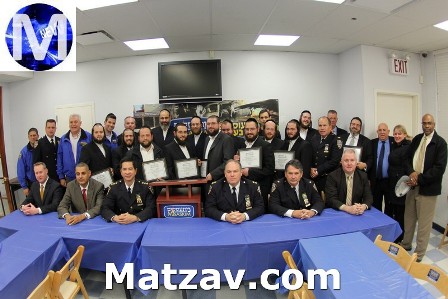 Brooklyn, NY – High ranking officials of the New York Police Department paid tribute to 16 volunteers of the Misaskim organization for assisting the NYPD and the Asian community on October 27th in what officials termed “one of the most gruesome crime scenes in memory.” A mother and her four children were brutally murdered in the Sunset Park section and left a crime scene that most seasoned police officers said they would not soon forget. The carnage left police officials with the quandary of cleaning up the home where the atrocities were committed before permitting other family members to return to the home. It was then the NYPD called Misaskim, an organization it had previously observed in their tedious efforts to respect the dead (kavod hames) and to bring every last ounce of fluids at the scene of a tragedy to burial.

After checking with its rabbinic board, as they always do in such circumstances, Misaskim volunteers were dispatched to the scene to do what they are unfortunately too well accustomed in doing, to clean up the aftermath of a vicious crime or a tragic accident. It was this incredible task that brought leading police officials to the Brooklyn headquarters of Misaskim. They came to recognize and to pay tribute to what they called “a community organization that went well beyond all norms in extending this assistance.”

For Misaskim, the crime scene assistance was part of an ongoing exceptional working relationship with police officials, which is part of Misaskim’s ongoing preparedness effort so that it could respond to any eventuality. The five murders in the three-room home on 57th Street, where the children and their parents enjoyed a seemingly ordinary life, the police said, stood out for their brutality and magnitude. It was “not something that has been seen before in recent memory,” said Chief Monaghan. Chief Chan called the Misaskim act ” a silver lining in an otherwise huge cloud.” All of the officials expressed their gratitude to Misaskim volunteers who went about their task in a professional manner, making a huge Kiddush Hashem and maintaining their excellent relationship with the NYPD.

Misaskim officials expressed their gratitude to the NYPD for their “continued friendship and assistance to the community whenever needed.” Each of the volunteers was presented with a plaque from police officials as representatives of the Jewish and Chinese media captured a truly magnificent moment in the lives of New Yorkers.