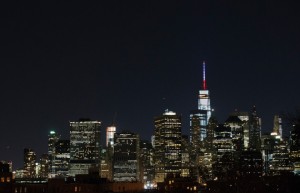 The NYPD has beefed up security across New York City in the wake of the deadly terror attacks on Paris.

Police are doing extra patrols and standing guard at the French Consulate.

“People will know the NYPD is watching,” Mayor Bill de Blasio said. “You’ll see additional checking of bags in subways at select locations and those locations will change regularly. The point is, we’re always in a state of vigilance, but we’ve added additional capacity to keep people safe.”

“We thanked the NYPD officers who are there protecting the consulate,” de Blasio said.

Flags have been lowered to half-staff at the French Consulate on the Upper East Side as heavily armed anti-terror forces make their presence known outside the building.

“This is something we’ve spent a great deal of time preparing for,” said Deputy Commissioner of Intelligence and Counterterrorism John Miller. “We have three rings of protection guarding New York City 24 hours a day.”