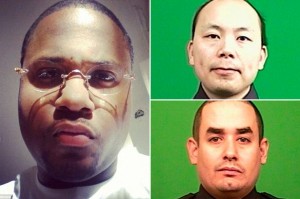 A day after Ismaaiyl Brinsley gunned down two NYPD officers in cold blood, evidence emerged that he may have had issues with mental illness. The New York Times reported that when Brinsley appeared at a court hearing in Cobb County, Georgia in August 2011 he was asked “Have you ever been a patient in a mental institution or under the care of a psychiatrist or psychologist?” He responded yes, according to court documents, though he did not disclose other details.

Brinsley, 28, was arrested nine times in under six years for an array of of charges, including: terroristic threats, shoplifting, and disorderly conduct.

Despite his criminal past, reports indicate that Brinsley did not have any gang affiliations.

He fatally shot himself after attacking Wenjian Liu, 32, and Rafael Ramos, 40. Read more at the New York Times.