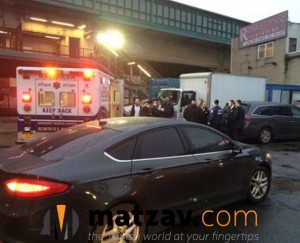 The incident occurred at approximately 3:35 p.m., when the victim identified by sources as Yerzhi Jagiyan, was leaving the D line train station at New Utrecht Avenue and 43rd Street. The suspect walked up the station steps, and yelled “[Expletive] Jew, where you running? Slow down, you [expletive] Jew.” In response, the victim asked the man, “Why would you call me like that? ” The suspect responded by asking the victim, “Do you want to fight?” and punched the man in the head and face.

Hatzolah was dispatched to the scene. The victim was then transferred to Maimonides Medical Center, where he was listed in stable condition.

NYPD 66th Precinct and Borough Park Shomrim were on scene investigating the incident, and police then called the Hate Crimes Task Force to investigate.

Police are encouraging community members that if anyone is being attacked to avoid engaging with the suspect, and to notify police immediately.

Anyone with information regarding this incident is asked to call the NYPD’s Crime Stoppers Hotline at 800-577-TIPS.