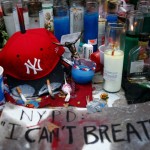 Today, a New York police sergeant was served with internal disciplinary charges for the death of Eric Garner, an unarmed black man who was killed by a police officer’s chokehold in 2014.

Sgt. Kizzy Adonis, who was supervising officers at the scene of Garner’s death, is the first officer to face formal charges for Garner’s death.

The police department did not specify the nature of the charges, but Adonis has been placed on modified duty. Read more.