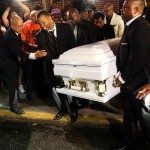 A medical examiner has made a ruling of homicide in the death of Eric Garner, the Staten Island man who died in a chokehold by a New York Police Department officer. Compression of the neck and chest and Garner’s position on the ground when being restrained by police caused the 43-year-old father’s death, with contributing factors including his acute and chronic bronchial asthma, obesity, and hypertensive cardiovascular disease.