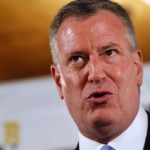 In a memo from Jails Commissioner Joseph Ponte to Mayor Bill de Blasio, the commissioner detailed plans to end the longstanding practice of solitary confinement for 16 and 17-year-olds for breaking rules.

NYC, which has the nation’s second largest jail system, was the target of a tough Department of Justice review that accused the system of using the method too often on teens. In one 21-month period, about 150 teens a month received solitary, which led to a total at 143,823 days of isolation combined. Every day, there is an average of 50 teens in isolation. Read more at AP.