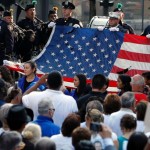 Air strikes in Iraq, ongoing unrest in Syria and the beheadings of two American journalists are casting a long shadow over the 13th anniversary of the Sept. 11 attacks.

While there is no specific threat against New York ahead of the Thursday commemoration, the rising power of disparate militant groups around the world presents the most complex terrorism danger since the twin towers were destroyed, New York intelligence officials said this week.

“It is layer upon layer upon layer – not all coming from the same place or ideology,” said John Miller, the New York Police Department’s deputy commissioner of intelligence and counterterrorism.

“We will, as always, ramp up intelligence gathering and visibility,” Bratton said. That means thousands of officers in specialized teams, bomb-sniffing dogs who can detect not only the scent of a bomb but the vapors of a moving target, undercover officers and teams of police using radioactive detection devices and other high-tech tools. Read more here.