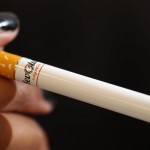 At an Upper West Side rally, Comptroller Scott Stringer said the companies are using the old playbook of the tobacco industry when it comes to targeting young people, 1010 WINS’ Roger Stern reported.

“There is a significant rise in electronic cigarette smoking,” Rada Sumareca, of the Oral Cancer Smoking Cessation campaign, said. “Among not only high school kids but also middle school kids. We’re talking 6th to 8th graders.”

And the comptroller said it’s working, with more teens vaping.

“E-cig marketing is seductive, reeling in children with enticing flavors like peach breeze and vanilla and chocolate,” James said.

“I think it’s the opulence that they bring with the ads that attracts kids to it and wanting to be like everybody that they see in the ads,” a 16-year-old girl told Stern.

But supporters of the vaping industry said the people at the rally really want to ban all flavored e-cigs, even for adults who are trying to quit smoking.

Spike Babaian co-owns a VapeShop in Manhattan and believes e-cigarettes should not be regulated under the same umbrellas as tobacco cigarettes.

“I think that e-cigarette companies should be allowed to advertise in places that adults are and adults see,” Babaian said.

“We need to be able to get the word out to smokers that these products are a viable alternative to smoking, and they just want to end all advertising,” said Gregory Conley, who represents a group funded by the industry.