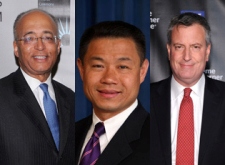 De Blasio, who serves as the city’s public advocate, went up against Christine Quinn, John Liu, Bill Thompson, Anthony Weiner, Sal Albanese and Erick Salgado at the debate at the Town Hall in Midtown.

As CBS 2 Political Reporter Marcia Kramer reported, supporters of each of the candidates were out in force before the debate began. But once it was in progress, de Blasio learned that being the perceived frontrunner can also mean becoming the punching bag.

Thompson took issue with a campaign ad that claimed de Blasio was the only candidate who would “end the stop-and-frisk era.”

De Blasio retorted that the content of the ad is indeed accurate, based on what he believes is required to stop the program. He said ending “the crisis of stop-and-frisk” requires a new police commissioner, an inspector general overseeing the NYPD and “a law ending racial profiling.”

“My only point is that I am the only candidate that will do the three things necessary to the end stop-and-frisk era, and I stand by it,” de Blasio said.

In what was characterized as a “cross-examination” round in which the candidates were allowed to ask questions of one another, Quinn asked Thompson whether she was satisfied with de Blasio’s answer.

“No, I’m not satisfied with the answer,” he said. “I think that if anything, when you talk about you’re the only one – first, Bill, I definitely don’t need lectures from you on this issue, and I don’t need legislation.”

De Blasio also took Quinn to task about the issue of stop-and-frisk. He accused her of previously voting against “a ban on racial profiling,” and asked if she would vote the same way again.

“Racial profiling is already illegal in the city as it should be, and I support that,” she said. “The bill tomorrow is not to ban racial profiling. It is to give individuals the opportunity to go to the state court as well as the federal court.”