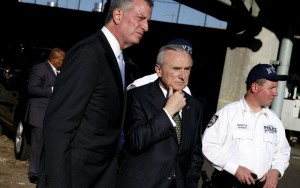 The mayor said there is “no credible and specific threat” against the city, urging New Yorkers to “go about their business” over the holiday season.

Bratton added that there was nothing new about the “hastily produced” video.

The new video shows a suicide bomber preparing a vest as well as a brief glimpse of Times Square. However, the footage of New York was taken from a video released by the group earlier this year, SITE director Rita Katz told Reuters. Read more at CBS New York.