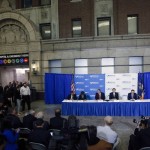 Speaking at a news conference, New York City health commissioner Dr. Mary Bassett tried to calm the city by claiming that Dr. Craig Spencer was not contagious while riding the subway, and declared, “We consider it extremely unlikely, the probability being close to nil, that there will be any problem related to his taking the subway system.”

However, as reported previously on Matzav, the bowling alley he visited in Williamsburg has been closed. In addition, Spencer’s fiancée and two friends have been quarantined, although none show symptoms as of now. Read more.