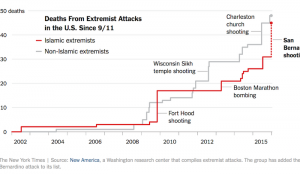 This graph appears in the New York Times story “What Investigators Know About the San Bernardino Shooting,” December 4, 2015.

The entire purpose of this graph, and of the survey it illustrates, is to downplay the Islamic jihad threat. For some unknown reason, the New York Times and the rest of the mainstream media have made one of their chief aims the exoneration of Islam. Their goal is that, even as the jihadi death toll mounts, no one has a negative view of The Religion of Peace.

This graph is ridiculous for five reasons:

2. It does not include foiled plots, which also would make the jihadi line dwarf the non-jihadi line.

3. It does not include the global component of the problem. There is a global jihad. Jihadis have murdered people all over the world. There is no global “right-wing extremist,” “white male Christian” threat.

4. It ignores the fact that a minuscule part of the U.S. population — Muslims — is responsible for around half of the successful attacks.

5. It lumps together shootings by clearly deranged people such as James Holmes with those of other deranged people who seem to have some ideology, such as Adam Lanza, to create the impression that there is some ideological movement and threat equivalent to that of Islamic jihad.

The mainstream media is no longer in any sense a news source. It is a propaganda arm for those who want you to think Islam is wonderful.

Several days ago I was contacted by NPR for a show hosted by Warren Olney and also joined by Peter Bergen and Frank Rich, on “the San Bernardino mass shooting and the impact on Americans who according to the latest Quinnipiac poll feel that homegrown terrorists are America’s biggest threat. Will this increase gun sales and anti Muslim sentiment?” I was extremely surprised to be asked, since usually only one point of view is allowed on NPR. The producer called me to talk over the issue and I soon realized that she wanted me to be the foil on the show, the ranting right-winger countered by cool and knowledgeable leftists. I explained to her why “Islamophobia” was a propaganda concept and why concern about the refugees was not racism and xenophobia. She seemed surprised that I wasn’t a ranting, frothing-at-the-mouth bigot, and I in turn wasn’t at all surprised when I got the email saying they didn’t want me on the show after all, as they had “decided to go in a different direction.” Reasonable arguments for resisting jihad and opposing a massive influx of Muslim refugees are not allowed on NPR, or anywhere else in the mainstream media.