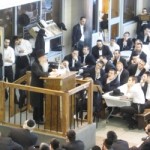 Lakewood, NJ – Once a year, Elimelech Ehrlich travels from Jerusalem to Lakewood, N.J., with a cash box and a wireless credit-card machine. During the three weeks he typically spends in town, Ehrlich – a white-bearded, black-suited, black-skullcapped, wisecracking 51-year-old – haunts the many local yeshivas, schools where Jewish men, mostly in their 20s, study the Talmud and other texts. Sometimes he loiters around the condominium complexes where students live with their young wives and growing families. Some days he hires a driver to take him to the houses of local ashirim, rich men. Throughout town, he greets old friends, asking after marriages made since his last visit and new babies. And at every stop along the way, he asks for money.

Ehrlich is a full-time beggar. His strategy is one part humor, one part not taking no for an answer. He gives you levity; he expects money in return. “I say rhymes, I say all kinds of jokes!” Ehrlich told me in June, on a break from begging. “I say: ‘If you don’t have anything, at least give something! Better than not giving at all!’ I ask them, ‘Give me 100 dollars, I’ll give you back 99 shekels!’ ” (A comically bad deal – even if his offer were genuine, a shekel is worth about 30 cents.) “They give a dollar or two, sometimes they give five,” Ehrlich said. Students who give maaser – the 10 percent tithe recommended by the Talmud – are more generous, he said. “They give 36, or 20.” Thirty-six is a multiple of 18, which represents life or good luck in Jewish numerology.

For years, Ehrlich has made a circuit of yeshivas in Israel’s religious cities, like Jerusalem and Bnei Brak, offering his Yinglish patter to pious students in exchange for a few shekels. About 12 years ago, he was working the grounds of the Mir, a large school in Jerusalem that is popular with Americans studying abroad, when somebody suggested that he travel to Lakewood, where American students at the Mir often settled on their return home. So began his annual pilgrimage. Often he raises money for friends who have to pay for a child’s wedding (and takes a cut for himself). This year, one of his 12 children was marrying in July, and Lakewood helped pay for the banquet. Soon after we met, I asked Ehrlich what he earned in New Jersey each year. He told me, but made me promise not to say exactly how much. Put it this way: After costs, he earns more than enough to buy a Honda Fit, but not quite enough for a Civic.

The yeshiva students may not give much, but nearly all of them give – and there are so many of them. Between 1990 and 2010, Lakewood’s population doubled to about 92,000 residents, largely because of the growth of its ultra-Orthodox Jewish community. Conveniently located equidistant from New York City and Philadelphia, Lakewood is home to Beth Medrash Govoha, the nation’s largest yeshiva. The school, founded in 1943 by the refugee Rabbi Aharon Kotler, has seen its student body swell to about 6,500, making it just smaller than Harvard College. The growing Orthodox movement encourages young men to forgo or postpone higher education for religious study, and the yeshiva has benefited from that. Other schools have followed suit, setting up shop in Lakewood. Most students are married, and families with five or 10 children are common.

Read the full article at the NEW YORK TIMES.

Leave a Reply to Lock your doors Cancel reply