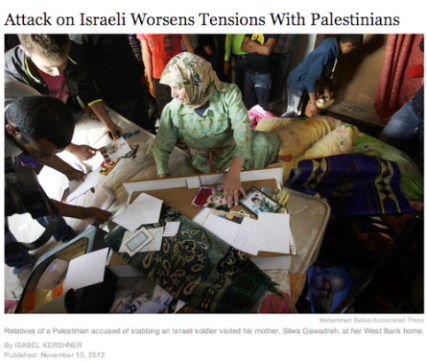 The New York Times was criticized by the Committee for Accuracy in Middle East Reporting in America (CAMERA) for leading with an Associated Press photo of relatives of the Palestinian terrorist suspected of killing 19-year-old Israeli soldier Eden Atias in its coverage on the recent murder.

“CAMERA has urged New York Times Foreign Editor Joseph Kahn to explain the very troubling decision to exclude photos of the distraught family of Eden Atias-of the mother and family members weeping over the coffin of the murdered teenager-in favor of a strikingly sympathetic image of the mother of the perpetrator,” CAMERA Executive Director Andrea Levin told JNS.org.

CAMERA has published a six-month study of New York Times reporting on the Arab-Israeli conflict that says the newspaper has a “clear bias for the Palestinian narrative.”

Leave a Reply to The Cohen Cancel reply