The New York Post is facing criticism over its decision to publish a front-page photo of a man, pushed onto the subway tracks in Midtown on Monday, trying to climb to safety before being fatally struck by an oncoming train.

Ki Suk Han, a 58-year-old from Queens, N.Y., was hurled from the 49th Street station platform onto the tracks by “a deranged man” around 12:30 p.m., according to the paper. Han was attempting to calm the man, apparently a panhandler, when a scuffle broke out, police say. The man then pushed him onto the tracks.

Witnesses told police the man had been harassing people on the platform. “At least one witness felt that the aggressor was emotionally disturbed,” NYPD spokesman Paul Browne told The New York Times.

“Onlookers screamed, shouted and frantically waved their hands and bags in a bid to get the downtown Q train to stop,” the Post reported. 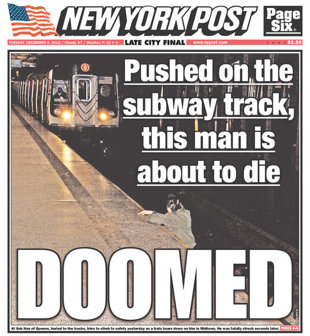 R. Umar Abbasi, a freelance photographer, was among those waiting on the platform. He said he tried to alert the train’s conductor with his camera. “I just started running, running, hoping that the driver could see my flash,” Abbasi told the tabloid.

During the chaos, Abbasi managed to snap the photo that the Post splashed on its cover.

In a larger version of Abbasi’s photo, people are seen huddled at one end of the platform in apparent fear.

“People were shouting and yelling when it happened,” Dr. Laura Kaplan, another witness, said. “But then people ran the other way.”

“DOOMED,” the Post declared on its front page. “Pushed on the subway track, this man is about to die.”

Abbasi did not immediately respond to an email seeking comment, nor did representatives for the paper. But plenty of Twitter users expressed outrage. “Sickening rubber-necking front page from the New York Post,” Ian Prior wrote on Twitter. “Imagine how this man’s family feels.”

“I would drop dead if I saw a family member about to be run over by a train on the cover of a newspaper,” Chris Spooner wrote. “@nypost trades in snuff.”

“Shame on the NY Post,” Haverly Elizabeth tweeted. “Though I am less then shocked they’d stoop so low.”

“Wow,” Daniel Joseph wrote. “The New York Post might be the most tasteless, disgusting, and despicable publication out right now. #Garbage #Classless.”

“Horrifying,” Katie Zezima wrote on Twitter. “Why did no one help?”

Han was taken to St. Luke’s Hospital where he was pronounced dead, according to the Metropolitan Transportation Authority.

The train’s operator was treated for shock, the MTA said, declining to release his name.

The man who pushed Han fled the station. On Tuesday afternoon, a man police believe is the suspect was taken into custody. His name was not released, but according to NBCNewYork.com, the alleged pusher is “a 30-year-old former deli worker” who was identified by ex-co-workers.