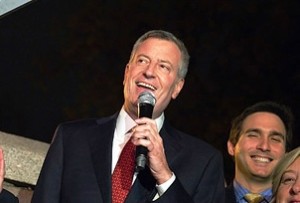 A menorah in Manhattan’s Carl Schurz Park was found vandalized—not once, but twice over the course of a few days.

The more recent incident was discovered on Monday morning, the day after the first night of the eight-day holiday of Chanukah. The park is home to Gracie Mansion, the official residence of the New York City mayor.

In response, Mayor Bill de Blasio joined community members and rabbis to light the menorah again on Monday night, showing that New Yorkers do not give in to vandalism.

Although event organizers had planned for just the Sunday-night menorah-lighting, the second lighting was a direct response to the incidents.
“This is the epitome of who we are in this city. This is the epitome of who we are because even when confronted by hatred, by division, we stand up, we show our strength, we show our resilience, we show our love for one another, we show our embrace of all peoples, and yes, the light does triumph over the darkness,” said the mayor, who attested that it was a “powerful evening.”
The menorah had been the centerpiece of a Sunday-night Chanukah celebration hosted by Chabad of the Upper East Side and Congregation Kehilath Jeshurun’s “KJ Beginners” learning program for adults. As many as 1,000 people attended.
The NYPD Hate Crimes Task Force is currently investigating the vandalism.
According to Rabbi Ben Tzion Krasnianski, executive director of ChabadLubavitch of the Upper East Side, the menorah, which was erected last Thursday, had been toppled over sometime on Shabbos, causing some minor damage to it. A passer-by apparently picked up the menorah shortly afterwards and set it upright.
The second toppling took place after Chanukah event on Sunday, which started at 6:30 p.m. and ended before 9 p.m., and caused more serious damage to the menorah and shattered the bulbs.
Rabbi Elie Weinstock of Congregation Kehilath Jeshurun said the acts of vandalism were especially troubling. “This Chanukah event has had such incredible energy and spirit, as it has grown over the past eight years. To wake up and see such an act of darkness is obviously very upsetting. We won’t, however, let it stop us.” 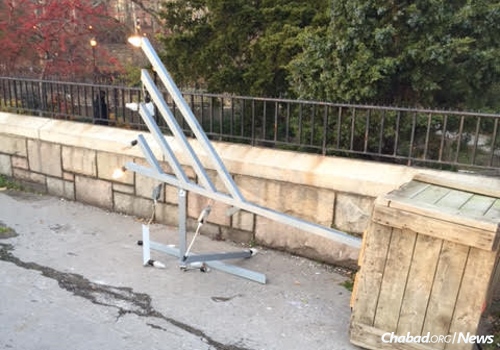 This Manhattan menorah was vandalized twice over the course of a few days. The incidents are being investigated by the New York Police Department’s Hate Crimes unit.
Before Weinstock thanked the crowed and wished everyone a “Happy Chanukah” on Monday night, he noted that the answer to the battered menorah is one directly related to the holiday itself. “More light into this darkness,” he said. “That is how we will be successful as a community, as a city and as a world that seems to be more and more filled with darkness, we will respond with more and more light.”
“We’re celebrating our religious freedom,” stressed Krasnianski. “We want to show the world that the Jewish response to hate is to fight darkness by increasing in light and joy. What happened last night will only unite us, strengthen us and encourage us to do even more.”
After the event had ended, the mayor then walked home, accompanied by an entourage of Jewish community members and supporters.
CHABAD.ORG
{Matzav.com Newscenter}