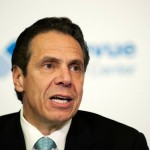 As an arctic front barreled toward the New York City region, Gov. Andrew M. Cuomo signed an executive order on Sunday requiring local governments across the state to take homeless people off the streets to shelters in freezing temperatures.

The order, which goes into effect early Tuesday, requires local governments to remove homeless people by force, if necessary, once the temperature drops to 32 degrees Fahrenheit or below. The governor’s order says that to protect public safety, “the state can take appropriate steps, including involuntary placement.”

“It’s about love. It’s about compassion. It’s about helping one another and basic human decency,” Mr. Cuomo, a Democrat, told NY1. Read more at the New York Times.