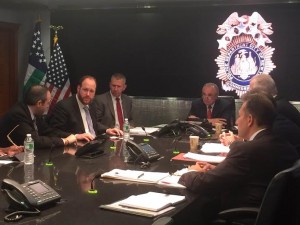 During the meeting Councilman Greenfield emphasized the fear that is fueled by the rise in anti-Semitic crimes in New York City. Last year, there were 192 recorded hate crimes, 64 of them were anti-Semitic hate crimes. The NYPD confirmed that this year there has been a 50% rise of anti-Semitic crimes between the months of July and September. The NYPD has recognized the importance of addressing this issue and has brought in the former Senior Advisor to the United States Secretary of Homeland Security to research this area and come up with a plan on fighting hate crimes more aggressively. To date, only 108 arrests have been made out of 313 hate crimes so far this year.

Councilman Greenfield hosted a rally at City Hall right before Rosh Hashanah with twenty-five other elected officials to make it clear that these hateful crimes are not welcome in the City of New York and demanded that the city do more to reduce anti-Semitic crimes. Following that September rally Commissioner Bratton agreed to sit down with the Council Members to discuss ways to reduce hate crimes across the city and ensure all precincts are accurately reporting hate crimes. During the meeting, Greenfield urged Commissioner Bratton to work on strengthening communication between precincts and the local community, especially in an instance of a hate crime, and for the NYPD to be more aggressive in denouncing such crimes. Councilman Mark Tregyer addressed the need for more officers on patrol in neighborhoods with high amounts of hate crimes and Councilman Stephen Levin discussed focusing on hate groups such as a recent gathering of white supremacists in Brooklyn. Councilman Mark Levine sent questions regarding accurate statistics of hate crimes and increasing transparency on hate crime reporting.

“Hate crimes have no place in New York City and we must all work together to stamp them out. I want to thank Commissioner Bratton and the NYPD for a productive meeting and for their comprehensive strategy to fight against hate crimes,” said Councilman Stephen Levin.

“I have been concerned with the rise in bias crimes and other incidents in recent months impacting the safety of neighborhoods across southern Brooklyn. I appreciate Commissioner Bratton’s response to these concerns and willingness to work with us in light of issues like the gun violence that continues to plague some residential areas and the hate crimes we have seen across New York City,” said Councilman Mark Treyger.

Council Member Mark Levine, Chair of the Jewish Caucus said: “In order to tackle this crisis, the public needs a full understanding of the scale and scope of anti-Semitic crimes in New York City. We should not have to wait for the state-mandated annual report to be able to access this information. Details on hate crimes should be available on a weekly basis so that everyone can track the progress in combatting this scourge.”