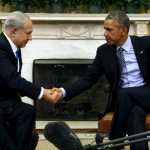 According to a new report from The Wall Street Journal, while the U.S. pursued a nuclear deal with Iran, the National Security Agency snooped on Israeli Prime Minister Bibi Netanyahu and his officials, ensnaring communications from members of U.S. lawmakers in the process.

The eavesdropping efforts revealed to the Obama administration that Netanyahu and his advisers deliberately attempted to undermine the nuclear deal discussions by coordinating with Jewish-American groups and undecided members of Congress.

Senior White House officials reportedly worried that the executive branch would be accused of spying on its legislative colleagues. Read more at the Wall Street Journal.