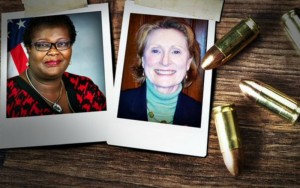 A National Rifle Association group tweeted a photo of a pair of New York state legislators on Monday with bullets scattered next to pictures of the two gun-control advocates.

The tweet, by NRA publication America’s 1st Freedom, featured State Sen. Roxanne Persaud and Assemblywoman Jo Anne Simon, both Democrats, after they announced legislation aimed at the sale of ammunition.

The New York Daily News reported that Mayor Bill de Blasio condemned what appeared to be a veiled threat.

Separately, monthly U.S. gun sales neared a record high in December, according to federal data reviewed by The New York Times, following a trend of spikes after the terror attack in San Bernardino and President Obama’s calls to make it more difficult to buy assault weapons. Read more at The Daily News.