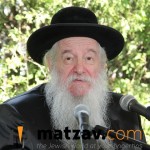 In response to a Matzav.com report about a video of a controversial rabbi regarding the scope of the Holocaust, the Hamodia newspaper published a strongly-worded editorial in today’s edition.

“In his ill-informed statement,” the editorial says, “for which he only recently apologized and admitted his ignorance of basic statistics, the rabbi made the egregious assertion that the number of Jews killed by the Nazis, historically known to be six million, was in reality closer to one million. Only. One million souls — one million worlds. That’s significantly more than the sum total of every single religious Jew — man, woman, and child — living today in the United States of America.”

This statement, notwithstanding explanation and apology, has already created unimaginable damage, says the newspaper, and who can calculate the future adverse ramifications of such an irresponsible statement for the world at large?

“With such a statement, he has, presumably inadvertently, joined the infamous league of Holocaust deniers, whose goal is to rewrite history,” says the Hamodia editorial. “This is not only an injustice to the Six Million Kedoshim; it is an injustice to all of us, their heirs, whose lives are dedicated to rebuilding a world that was destroyed so brutally. While he explained that his intention was to draw attention to the burning spiritual holocaust that has consumed Klal Yisrael with increasing intensity since the Second World War, and that assimilation and intermarriage in Europe rendered many of those who are counted within the Six Million not to have been halachically Jewish, both the insult and the danger that his outrageous words caused cannot be so easily healed or reversed.”

The Novominsker Rebbe, Rav Yaakov Perlow, said in a statement released to Hamodia: “I condemn in the strongest terms possible the outrageous claim that fewer than a million halachic Jews were killed in the Holocaust. This claim is demonstrably false, profoundly offensive and extremely hurtful. It is an affront to the Six Million Kedoshim, precious, holy, Jewish souls whose lives were snuffed out by the sonei Yisroel. Minimizing the degree of the terrible destruction of Churban Europa, in a most morally irresponsible manner, does a grave disservice to truth, and only gives enemies of Klal Yisrael ammunition for their lies.”

The editorial continues: “As the rebbe said, the statements made by this speaker are not only offensive, but totally unsubstantiated. There can be no doubt as to the bona fide Jewishness of the Six Million. While secularization was indeed rampant by 1939, in Eastern Europe, the power of the church and anti-Semitism most likely prevented any noteworthy amount of intermarriage from occurring. Even the members of the most overtly anti-religious and popular movements such as Zionism, Communism, Socialism and even Bundism remained Jews. Assimilation, as we know it in American terms, was simply not an option. So the point is not the precise number of Orthodox victims (now estimated to be between a third and a half of more than 3 million Jews in Poland alone) but the total number of Jewish victims, whose halachic Jewishness is not a question.”

These comments went unchallenged for so long, the newspaper says later, despite the fact that the speech was made before engaged Jews. “Apparently, the audience was so ignorant and desensitized that his statements were received without objection. How many Jews, particularly of the younger generations and those whose family history spared them the horrors of the Holocaust, have familiarity with even the basic facts and the gruesome reality of what befell the Jewish People during those dark days? It is our obligation to ensure that the current and future generations of Jews know the truth.”