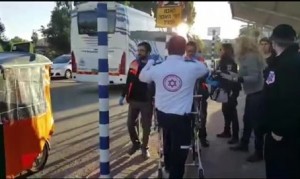 Two masked men attacked a security guard outside a school in the northern city of Afula this morning and then made off with his gun, police said.

The incident happened outside the Nofim school in the city.

In a statement, the Israel Police said the attackers “ambushed the guard, who was outside the school grounds during a routine sweep.”

An initial investigation found that the attackers beat the security guard after he resisted their attempts to take his weapon.

Police said they were treating the incident as a criminal event and not a terror attack.

Magen David Adom paramedics reported that the security guard, in his 50s, sustained light to moderately injured to his upper body during the attack and was evacuated to the Emek Medical Center for treatment.

Police, assisted by a helicopter, were combing the area for the attackers.

Schools in Israel often feature an armed guard at the front gate as protection against terror attacks.

Some two years ago, a similar attack took place at the same school during which the security guard’s gun was snatched, Army Radio reported.

Monday’s incident came during a period of almost daily Palestinian attacks that have persisted for over two months.

Afula has seen several attacks amid the recent surge.