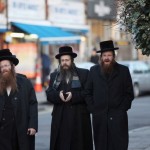 Members of the frum community of the Tottenham Hale area of north London were pelted with small gas canisters by a group of men in a pickup truck.

IBT reports that the three were out shopping at the Tottenham Hale retail park when they were attacked on Wednesday.

“The verbal abuse was disgusting, and small objects were thrown towards the victims, making them fear for their immediate safety,” Shomrim volunteer Michael Blayer said.

“The incident has been reported to the Metropolitan police, I have absolute confidence in our local police that this will be thoroughly investigated. I encourage anyone who witnessed this incident or who may have experienced a similar incident to report it,” he added.