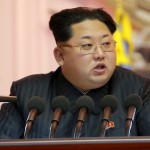 North Korean leader Kim Jong Un said Thursday that his country has developed a hydrogen bomb. Kim reportedly said his grandfather “turned [North Korea] into a powerful nuclear weapons state ready to detonate a self-reliant [atomic] bomb and [hydrogen] bomb to reliably defend its sovereignty and the dignity of the nation,” during a tour of the Phyongchon Revolutionary Site.

The hydrogen bomb has a stronger blast than the atomic bomb, but experts are skeptical of North Korea’s claims. Read more at NBC News.