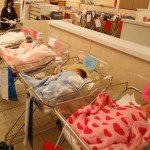 Ahead of 2016, Israel’s Bureau of Statistics officially published the most popular names within Israel in the past year.

Operation Protective Edge influenced the popular names for boys and, as a result, Eitan ranked seventh place for boys, compared to tenth last year. The names Yehudit and Adelle continue to be popular for girls.