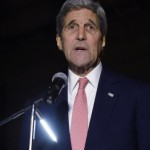 Secretary of State John Kerry’s assertion that the Palestinian Arabs are in a “very dire situation” is not only absurd but also very revealing–about the fantasies that guide the Obama administration’s Middle East policy.

Emerging from a meeting with Palestinian Authority chairman Mahmoud Abbas on November 24, Kerry declared: “I know that the situation for Palestinians in the West Bank, in Jerusalem, in Gaza is, at this moment, very dire, that there are extraordinary concerns, obviously, about the violence,” he added.

“Dire” ? Is he kidding or just ill-informed? When was the last time Secretary Kerry read his briefings on even the most basic information about conditions among the Palestinians?

Life Expectancy: In Judea-Samaria, the average life expectancy of a Palestinian man is 73.6 years, for a woman it’s 77.9 years. That’s higher than, for example, Brazil, Turkey, and Russia.

Literacy: Two years ago, the PA’s own Palestinian Central Bureau of Statistics announced that Palestinian Arabs now have one of the lowest rates of illiteracy in the world, just 1.8% among men and 6.4% among women.

Infant Mortality: The infant mortality rate among Palestinians in Judea-Samaria –according to the CIA’s World Factbook– is currently just 13.08. That’s lower than Venezuela, Peru, and the Philippines. There are 114 (out of 224) countries on the list with higher mortality rates than that of the Palestinians.

That’s right: there are more Israelis than Palestinians living below the poverty line, according to the CIA. The Israeli social policy group “Latet” reported last year that the the Israeli poverty rate is 31.6%. The Israeli government’s National Insurance institute, which measures poverty differently, calculates that 18.6% of Israelis are below the poverty line–but even that figure is still higher than that of the Palestinians.

Likewise, from a political point of view, how can any reasonable person think that the Palestinians are in a “dire” situation? More than 98% of them live under the Palestinian Authority, not Israel. They have complete self-rule. They manage their own educational, social, economic, and political affairs. The only thing that sovereign states possess which the Palestinians don’t have is tanks and fighter jets. That’s “dire” ?

Perhaps most troubling is the policy position that Secretary Kerry and the Obama administration are promoting, based on this fantasy about the Palestinians’ dire straits. Kerry told reporters in Ramallah that he had come to the Middle East “at the request of President Obama” in order to “restore people’s confidence in the ability of a two-state solution to still be viable…”

No, Obama sent Kerry to rescue the goal of giving the stabbers and snipers a fully sovereign state. To “restore people’s confidence” in the viability of “a two-state solution.” For Obama and Kerry, morality doesn’t matter. No matter how many Palestinians murder Jews, and no matter how much the Palestinian Authority leadership encourages and incites those murders, they must be given a state.

Because, after all, the healthy, well-fed, and well-educated Palestinians who already have complete self-rule are in such “dire” conditions!