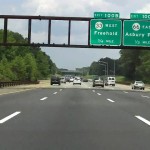 Two state troopers helped deliver a baby on the side of Garden State Parkway earlier this week, according to the State Police.

An expecting Lakewood, NJ, mother was was being driven to Valley Hospital in Ridgewood just after 4 a.m. Monday when the couple realized the woman would not make it to the hospital, authorities said. They pulled over at mile marker 143.2 on the parkway and dialed 911.

Two troopers, Alex Muro and Arnaldo Mateo, arrived 10 minutes later to find the woman in labor, police said. They assisted the woman and helped cut the umbilical cord before handing the newborn baby girl to her mother.

They were taken to to Valley Hospital and were reported to be “doing well,” police said.

It was the third time in as many months State Police delivered a child on the side of one of the state’s roadways.

“These recent newborns should form a club when they’re older,” the State Police wrote on their Facebook page Thursday.