From a New York Times report: Rabbi Mendel Bogomilsky set out 20 years ago to establish a foothold for his faith in a wilderness of sorts. Rabbi Bogomilsky is one of 4,000 emissaries of the Brooklyn-based Lubavitch Hasidic group, which has been setting up outposts across the globe to encourage more engaged Jewish observance. He put down stakes in Millburn, N.J., a genteel township with Reform temples and Conservative synagogues but no Orthodox house of worship.In Millburn, the rabbi has conducted services out of two homes he owns, sometimes drawing 30 to 40 worshipers on the Sabbath and 150 on the High Holy Days, but also prompting repeated protests that he was disrupting his neighborhood’s suburban tranquillity. Now he wants to build a synagogue, and he has encountered strong resistance from Jewish and Gentile neighbors over his application for zoning variances.

Unrolling architectural sketches for a visitor, Rabbi Bogomilsky said he wanted to tear down his family’s home on Jefferson Avenue and a house next door that was donated by a supporter. He wants to replace them with a 16,000-square-foot, 144-seat Dutch colonial-style synagogue and social center, as well as a parking site for 50 cars. Since the two plots together total 1.8 acres, he needs a variance from the zoning board because the code requires houses of worship to be set on three or more acres. 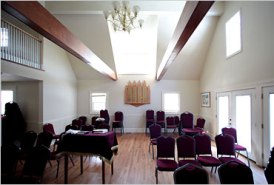 More than 100 neighbors have banded together to block his request, calling themselves the Concerned Neighborhood Association of Millburn Township. They argue that the town’s leafy character would be violated by shoehorning an institution into this residential enclave.

James Welch, a retired Nabisco executive who lives next to the rabbi’s Jefferson Avenue home, said that he was bothered by periodic celebrations and fleets of parked cars, but that those annoyances were minor compared with the central issue – that a synagogue on so small a plot could open the door for day care centers or shelters to do the same.

“It won’t just be houses of worship,” he said.

In a town of bankers, lawyers and doctors, where the rabbi estimates that one-third of the 20,000 residents are Jewish, some accuse his critics of being anti-Orthodox and not wanting to see their staid town transformed by lively prayer gatherings. But the critics say it is purely a question of zoning.

“I’m Jewish and have lived here for 35 years,” said Michael Becker, a communications consultant for the neighborhood association. “There’s nothing about this organization that has anything to do with anything except rules.”

At a meeting in February, a critic of the proposed synagogue pointed out that he had lost relatives in the Holocaust and that his sister was an Orthodox Israeli.

Why, the opponents ask, could the rabbi not find a legal three-acre lot? Kevin Coakley, a lawyer for the neighborhood association, said that New Jersey case law upheld the right to host prayer services in a home, but that at some point the number of worshipers and their cars disrupt a neighborhood’s calm.

The rabbi, who said it would cost $6.25 million to get his synagogue up and running, including construction and acquisition costs, contends the town has gone to absurd lengths, including police surveillance, to stop him from hosting services at his homes.

Last year, the town sued to stop the services, saying that Rabbi Bogomilsky had surreptitiously transformed his dwelling into a worship center, complete with a separate balcony for women. A state judge urged the parties to settle the matter, and they did, with the town forgiving almost $500,000 in fines and the rabbi agreeing to seek a variance for an actual synagogue. But now that he has, his neighbors are up in arms, upset at the scale of the building he has proposed: It would house four classrooms; a mikvah, or ritual bath; and offices.

The rabbi, a cheerful man of 44 with a broad salt-and-pepper beard and a family of seven children, said the building would be screened by trees and buffered from neighbors. He also said he had no intention of buying a three-acre lot in a residential zone – the only place the town allows houses of worship. Three of the five lots that are available are occupied, he said, and the two that are for sale are more expensive than the site he has chosen. Were he to buy one of those two, he added, he would still draw complaints.

Still, the rabbi does not accuse his neighbors of malice.

“I think it’s more Nimby,” he said. “I can understand neighbors being afraid their neighborhood is going to change. What I can’t understand is why they haven’t found out what our plan is.”

The rabbi’s father was also a Lubavitch rabbi on a mission. He was sent to Newark to preserve Jewish life there after Jews began leaving for the suburbs. The father led one of the last synagogues in Newark, a city where there had once been more than 40.

As for the son, he bought his other house, on Millburn Avenue, in 1992, holding services there and displaying a 13-foot menorah that lingered long past Hanukkah. In time, he opened a store for Jewish religious articles near the town’s center and a ritual bath in his basement, and began a Hebrew school program in the local high school. But he longed for a formal synagogue, and bought the house on Jefferson Avenue in 2005.

Rabbi Bogomilsky’s neighbors are determined that he not realize his wish.