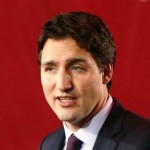 While Justin Trudeau stunned many with his victory as new Canadian prime minister, one long-deceased public figure knew all along that he would one day win: Richard Nixon.

According to The Guardian, Nixon toasted a four-month-old Trudeau – son of then-PM Pierre Trudeau – as “the future prime minister of Canada” during a 1972 state visit to Ottawa.

He turned out to be correct, 43 years later. Read more at the Guardian.