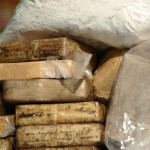 A 4-year-old girl in Delaware brought over 200 bags of heroin to her nursery school on Monday to share with her classmates because she thought they were candy.

Her teachers noticed students had small bags of an unknown white powdery substance. They brought the bags to the Selbyville Police Department, who determined the contents were heroin. The girl’s mother, Ashley Tull, was then arrested for maintaining a drug property and child endangerment.

Tull was released on $6,000 bail, but has lost custody of her daughter, as well as two older children. Read more at NBC Philadelphia.